Yesterday morning, my bodily needs caused me to stumble to the washroom at five o'clock. Of course, I noticed Mr Rocks lurking about and assumed that he was waiting for his six o'clock feeding of tuna. Thought I: what the heck, I'll take him downstairs now. Truthfully, I had been sleeping poorly and was just as happy to be out of that cursed bed for a stretch.

As cat and human made to descend the stairs, I heard Cuppa calling from the bedroom. She had already fed him. I stared perplexedly: how odd for us both to decide to feed the guy well before his usual time! Her explanation surprised me: "Your moaning and groaning woke us both up."

In the middle of the night, I had moved to the guest bed in hopes that I might rest better over there. It didn't work; nevertheless, I was unaware of vocalizing loudly enough to awaken both human and beast from a bedroom across the hall.

You see, not only have I been feeling rather terrible because I am miserable in body, but my supposed rest is also troubled by repetitive dreams: stupid repetitive dreams. They go on and on and on. I get on some sort of theme, and it won't quit. I change beds, roll over and over, anything to shake it up, but it persists. It's not a bad dream — just stupid — and totally aggravating in its unceasingness. It drives me crazy! And so, we all got up and headed down for morning victuals. I tried to force something down, but all I could tolerate was milk and two arrowroots. By rights, I should be svelte by now.

It was a hard day. I was very emotional: felt like bursting into tears. Don't ask me why; this illness (or whatever the heck it is) has been an odd voyage. Apart from the silly night dreams described above, there are the daytime visions. if I begin to nod off during the day, it's as if I begin to hallucinate. Scenes flash before me, and they seem real. I can still describe yesterday's scenes and today's, and I don't often remember dreams. Although I am somewhat aware of where I truly am and that I am dreaming, they are so real that I have, nevertheless, reached out to attempt to grab an object that was nearby in my dream vision. (Aside: I wonder if religious visions might not come from sources like this?)

It's all been rather vexing. I think I am now on the path to recovery, but it's more like a precipitous, narrow mountain path, I'm afraid: hardly an expressway to the Promised Land. In fact, I've been put on another seven days of antibiotics. Oh glory!

The one cheery moment from bleak yesterday was enjoyed upon finding the following picture taped to my computer. Sometime during or shortly after our early morning breakfast (milk and Arrowroots for me — yum), I moaned to Cuppa in my most forlorn voice that "it's not easy being me." When I found this taped to my computer shortly after, I laughed — a genuine and good laugh. It's from O's latest edition. 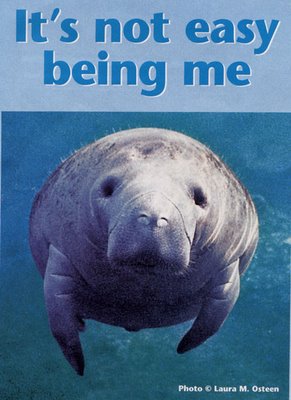 Posted by Anvilcloud at 3:30 pm

Labels: not easy being me

Must be something about the alignment of the stars...Treebeard is ill as well, although his is a more northerly infection than yours :) Unfortunately, he, too, is having odd dreams and reacting badly to his antibiotics. Part of his problem may be that he is so seldom ill -- he doesn't know how to just put everything else on the back burner and get well.
Anyway, I just wanted to let you know that you have my sympathies and I hope this second round of anti-biotics will knock out the little critters making your life miserable.

By the way, what is Arrowroot??

AC, I'm sorry this isn't progressing as smoothly as you would like.

I hope things start getting better quickly, both the physical and spiritual.

So sorry you're having this temporary rough weather. I too, am scheduled for some unpleasantry. Drugs can be life-saving, but the side effects can be unsettling. Hope you're not adverse to taking pain medications and sleep and anxiety meds as needed. I hates suffering - hope your's is over soon. (Funny, my husband has been sharing his stepped-up dream activities)

Good luck, dear man. I hope you find your way through this one quickly.

Any drugs, even the mild, otc ones, have weird effects on my sleep - and dreams. Hope things are all well soon. I too am unfamiliar with an Arrowroot. ec

Boy it sounds dreadful, AC! I hope you soon find your way back to health, and get some much-needed sleep.

Oh, and an Arrowroot is a cookie. A biscuity kind of thing for babies without teeth. And men without sleep. They're good, actually.

What, they don't have those in the states?

Hmm. Do you suppose the antibiotics I'm taking for a sinus infection are causing the strangeness of my dreams? I have to admit they are very odd indeed.

I know those dreams. I used to get them as a child when I had a fever. I remember trying to explain them to my mom and she didn't understand. You understand! Hurray!
Sorry, I don't mean to be celebrating while you are so ill but I thought I was the only oddball who dreamt those silly dreams. I hope that you feel better very, very soon.

Have you told your doctor about this? Seems you might need to tweak your medications a bit.

My dad had odd dreams during a hospital stay a few years ago.

He saw flowered wallpaper that wasn't there, and then butterflies flew off the wall all around the room. His comment was, 'at least it's butterflies, i'm not afraid of flowers or butterflies!'

They did change his meds a little, and it helped.

Yikes, that sounds so awful! Hope you feel better soon. My son gets weird dreams and "visions" when he's dehydrated (from fever and illness) be sure to take in enough liquids!

My goodness.. I certainly hope you are feeling better. Have you been running a fever with your illness. It seems that people often have weird dreams with fevers.
Love the photo. :-)

Ahh I hope you feel better real soon. I too am wondering what ArrowRoot is? do you make tea with it? that picture Cuppa stuck on your computer is so cute! :)

Take care and get well soon.

AC, Julie and I are wishing the best for you and Cuppa. I hope these tough times are behind you soon.

Hope you're feeling better soon. As others hinted, I wonder if what you are taking might be causing those dreams. Might be worth talking to the doctor.

By the way, I loved the picture you posted at the end of your post. Thanks.

hope you feel better soon! Makes me feel I should stop moaning about my paltry cough!

Have you been suffering the plight of mankind lately? I hear that is a factor that contributes to visions and intense dreams. Your sincere question about prophets is one of my own....what makes them DO such a thing!

Surely, you have no followers yet. Or do you?

We have Arrowroot in the States but unless you're wandering through the babyfood section you might not spot it.

It gets soggy quickly when gummed by babies.

I do hope this malaise leaves you soon. You answered the question I was going to ask. You've seen a doctor.

If you’re going to have visions anyway, try for something productive like lottery numbers.

I had a professor once who went in for surgery. During the middle of the night he woke up and saw the IV dripping into his arm and realized that that was all the food there was in the world, and it wasn’t fair that he should have it all to himself.
Fortunately, the United Nation was meeting in his bathroom that night, so he got up to offer his food to the world. That’s were they found him, standing in the bathroom with the IV below his arm (so the blood was going into it, not the other way around), looking for the UN.

Different people react differently to meds and I'd check yours out. A urinary infection wouldn't cause those things but the meds you take to "cure" it sure would. I wish you all the best and hope you're back on the well list real soon.

I used to have this recurring dream. It freaked me out for a while, then I just got used to it (even though I remember that the theme of it was troubling.)

Funny thing is... now I can't remember anything about it.