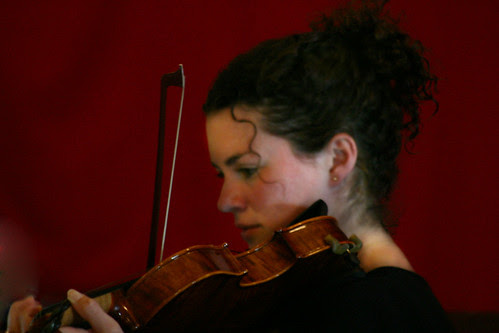 On Saturday, Cuppa and I headed to Middleville, which, oddly enough, is in the highlands of this county. The county is called Lanark and with places like Perth and Glen Tay, it doesn't take a genius to decipher much of the early background. In fact, we found a pioneer cemetery in Middleville, and many of the tombstones declared that the deceased had been born in Scotland.

The whole Ottawa Valley region is known for fiddling and Celtic music. At least that's true in the rural areas. It's certainly not just Celtic; we hear a lot of country music as well; in fact, on the whole, we hear a lot more of it. But fiddles and guitars and the like kind of fit right into that genre too.

Anyway, the point is that we went to this little community hall to take in a Celtic Jam. There were thirteen musicians and not many more in the audience. They didn't really need an audience; they were just jammin', playing for their own enjoyment. They sat in a circle: a few fiddles, a keyboard, a couple of guitars, and a ukelele. Some of the musicians switched to a flutish instrument periodically: not an orchestral flute, something simpler.

Each musician had a songbook propped in front of him or her, and they simply went around the circle, each person calling out a favourite in turn. I don't know how many times they made it around the circle, but they were still enjoying themselves when we left after three hours.

I love the photo of the young fiddler above. I took quite a few pictures, but the light was low, and most weren't terribly presentable. But they had fun, and we had fun. Two of the veterans are pictured below.

We are so caught up in performance music these days. Maybe that is why I found it so delightful to see and hear these amateurs simply enjoying their own and each other's participation. It did the heart good. 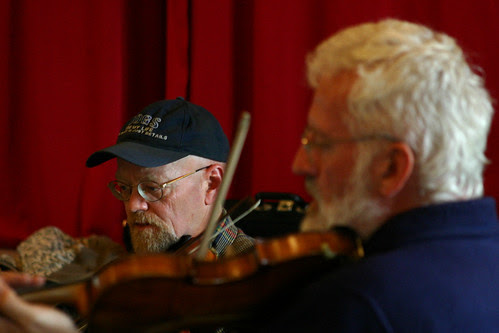 Posted by Anvilcloud at 8:30 pm

I think that's what I miss most about my life "before allergies" - I used to spend quite a lot of time jamming with other musicians. Sounds like it was a great time.

What a lovely way to spend some hours!! And to think that you were about the only listeners there...I imagine they played better for not having a larger crowd to be in front of....wow!

There is something special about music played live.

That must be why people pay so much money to see professional musicians!

What a lovely way to spend some time! Celtic music is wonderful!

I'm fond of Celtic music too. Sounds like a good time.

In Cape Breton these "Celtic Jams" are common. They're most often held at someone's home. There's good food, lots of drink, and lots of fun. The Gaelic term they use is "Ceilidh".

It's pronounced "KAY-lee" and it's the most fun a person can have with his clothes on.

The "flutish" instrument you describe is most likely a tin whistle. I so wish I had been there, AC. I'm a big fan. It's the most joyous music I've ever heard!
***

Once again, beautiful pictures, AC! I especially like the top one. I think you really captured a look of concentration on her face, and yet the shadow and the uniform background give a very nice sort of comfortable intimacy, like being in a small hall with just you and the music. Well done.
I’m another big fan of the Celtic music, but there’s not allot of it in the desert – unless you count Amazing Grace on the bagpipe as you walk through the isles at Wal-Mart. I truly miss good Celtic music.

That sounds like a really great time to hear them just playing and having fun with their music!

That totally seemed like it was tons of fun. I love live music. Not at a loud concert venue with thousands of people and large crowds though...I like quaint little gatherings at a jazz fest or a celtic jam fest!

Even with low-light conditions, you were fortunate to get some great images here. I love the color tones.

I am just one among the many comments here. I too love celtic music. And it sounds like you found a group who would love it with or without an audience.

I wish you could have recorded some of the fun to share too.

There is something special about music played from the heart. The photo of the the young girl is absolutely beautiful. Makes me wish she could see it.

I have been having quite a romp through your pictures and enjoying them immensely. Thanks. ...Z